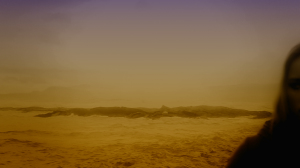 A film I wrote was pitched in Haugesund, Norway, this week:

"Recurrence, dir Marteinn Thorsson, prod Gudrun Edda Thorhannesdottir, DUO Productions (Ice).
Supernatural thriller about a troubled young woman, with a parallel story about another woman in the early 1900s. Thorsson said, “The film is has a similar mood and atmosphere to The Witch and also The Others. I’m big fan of Guillermo Del Toro so it has those fantastical elements. I want to make a supernatural thriller that has substance and appeals to a large audience.” To shoot autumn 2017."

And a project, where I have story-by-credits, was also introduced in Norway:

"The Deposit, dir Asthildur Kjartansdottir, prod Eva Sigurdarddottir, Askja Films (Ice) [pictured]
Complications arise when a bankrupt fortysomething woman rents spare rooms in her gorgeous house to a Muslim woman from Uzbekistan and an illegal immigrant from Uganda with her 6-year-old daughter. Sigurdarddottir, who was the line producer on Rams, said the film is “a drama with a social political edge. It deals with the themes of immigration and the sensitivities and difficulties that arise when locals and immigrants mix, in Iceland this is quite a new phenomenon.” Kjartansdottir has worked with female immigrants in Iceland and drawn from their stories; real immigrants to Iceland will play the two women. To shoot autumn 2017."