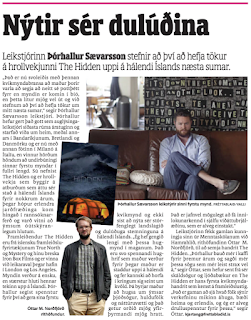 The other day, a friend of mine and me did an interview about a project we're working on. It's called The Hidden and being produced by Icelandic companies TrueNorth and Mystery, and UK production company Iron Box.

Funding has started, it was introduced in Toronto last month, and will also be introduced in AFM next month. Casting is also starting, in London and LA. It will be shot largely in Iceland, but the film is in English.