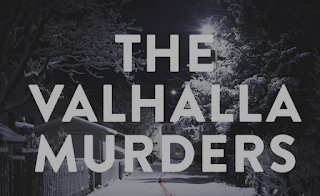 The TV series I've been working on, The Valhalla Murders, received funding from the Nordisk Film and TV Fond. Very honored, and very honored to be part of the fine team making this series:

"The Valhalla Murders produced by Iceland’s Truenorth for RÚV was granted NOK 2.5 million. The 8x50’ crime show is created and directed by Þórður Pálsson from a screenplay by Margrét Örnólfsdóttir (Trapped 2, Prisoners), written in association with crime author and poet Óttar M. Norðfjörð.

Icelandic born police profiler Arnar who lives in Denmark, is asked to go back to his native country to investigate the first serial killer case. He teams up with the local senior inspector Kata who resents his arrival, as she is the lead detective on the case. The murders don’t seem to have much in common until they connect it to a home for troubled boys dated back to the 1980’s.

The series is produced by Iceland’s Kristinn Thordarson and Leifur B. Dagfinnsson of Truenorth, with David Oskar Olafsson of Mystery Production. DR Sales handles world sales. Filming is set to start on October 9, 2018 with a delivery in the fall 2019."